(Gee-WHIZMO! Vs. is playable in-browser, but may not run at Maximum Power. if things don't seem to be working right, give the standalone download a shot!)

hi there! im chess. thanks for looking at my thing.

this was originally made for a game jam where the theme was to make a 30 second 1v1 game with a theme of "twins," and also to channel some pirate cart style Slight Copyright Infringement.

i wondered if maybe the gameplay style of Gimmick! for the famicom would make a good 1v1 game, so i took a couple days to whip up a prototype, and it, uh, wasn't very fun, so i stopped working on it halfway through the jam,,,,

i've been sitting on it for a few months without releasing it. this month, for some reason, i was compelled to take a few more days to polish it up and let it out into the world.

it was just an experiment, and i'm hesitant to call it a SUCCESSFUL one, but i learned some stuff and i hope you manage to have some fun with it!!

unfortunately, there is no cpu player - so you'll need to have someone to play with. or be, super dexterous. or you can just have fun bouncing around for a few minutes by yourself! that's what i've been doing.

Gee-WHIZMO! Vs. is also compatible with the itch.io standalone app! simply add it to your collection and it'll be available from within the app for install and launch. 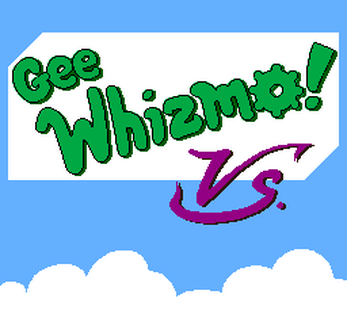 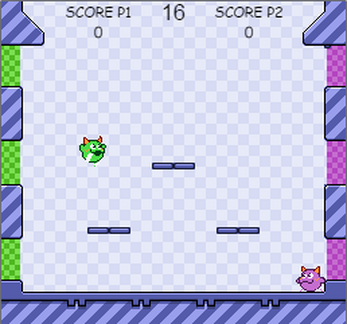